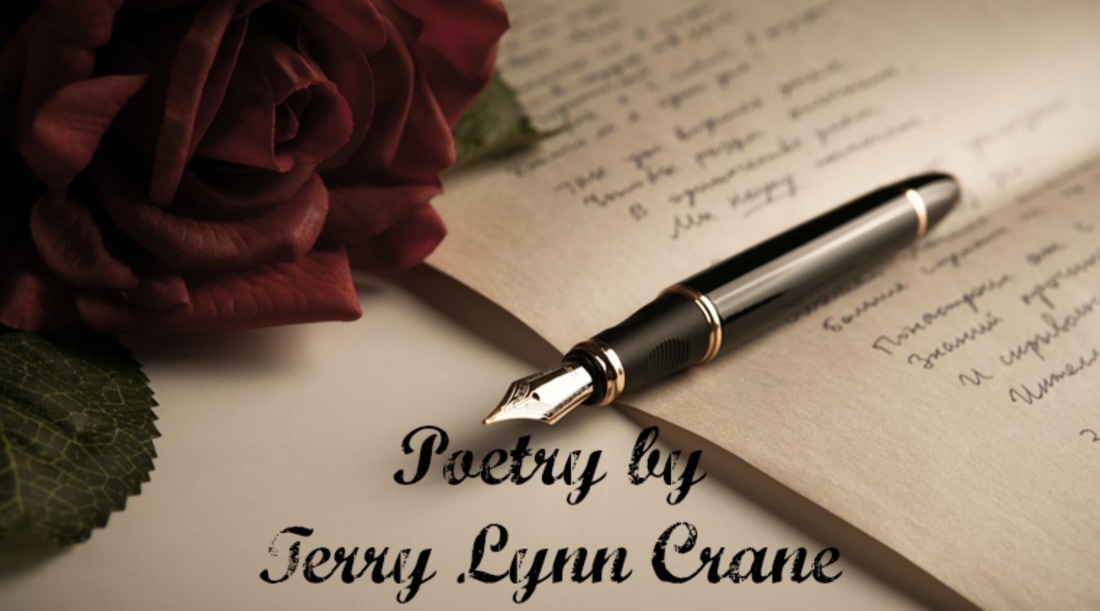 
The smell of spring is everywhere as I awaken to open windows
of freshly cut grass and of flowers who have peeked their tiny heads into a new world---an inspiration to this prose.


I touch the dew that lay moist upon the roses’ prickly thorn,
And I breathe in all I can contain on this beautiful April morn.


Oh, yes, spring, the pleasant change from Ole Man Winter’s icy fingers that once left the trees a glisten,
But now, on the boughs of greenery, the swallows sing and I pause a time to listen.


Spring---full of greenness, brightly colored lawns and fields
Oh, how for hours I could lay outstretched upon a grassy hill,


And watch the slowly moving clouds become some familiar shape
While upon the wind’s mighty wings, it hastens an escape.


For everything there is a season, a reason and a time,
But spring, my favorite time of year, is, by far, the most sublime. 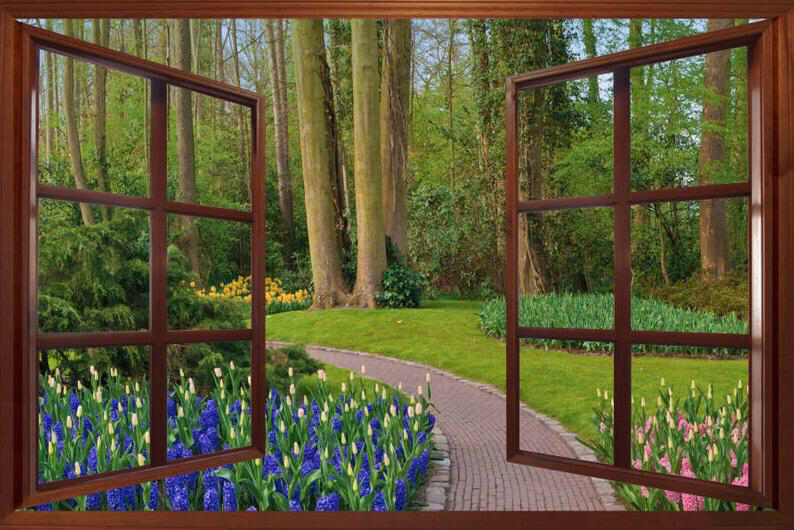 Inside an orb of crystalline
A world of fantasy can be seen.
I picked it up and looked inside,
Gave a shake—eyes opened wide.

Magically, I was whisked into
A little house with an inward view.
The blustery wind began to blow
Floating flakes of pure, white snow.

The tiny house was warm and cozy.
Inside—a family with faces rosy.
The smoke in the chimney rose higher and higher
While their dog slept peacefully by a crackling fire.

Through the tiny window I peered
And saw a little man with a snow, white beard.
He held a red sack that was packed full of toys
That he was bringing to all the good girls and boys.

The tiny children slept snug in their beds
Covered with quilts clean up to their heads.
I quickly hid behind the door
Before I could blink, ole Santa was indoors!

He gave the little dog a treat
Then tended to his work ‘til all was complete.
He nodded his head and gave me a wink.
Before I knew it, he disappeared in a blink.

How wondrously magical to be in that place,
To linger in another time and space.
Who would believe I was a Claustrophobe,
When looking at me inside a snow globe. 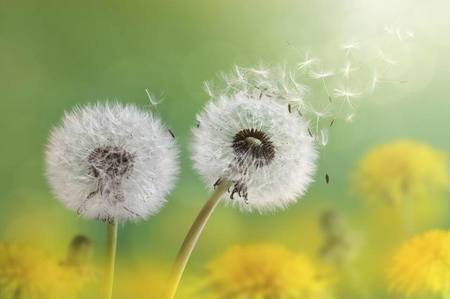 The meadow was a sea of gold amidst the magic blooms of Tara.*
Such joy it brought to stroll among the crowns of white, feathered tiaras.

As fairy tales which beckon back to the lazy days of yore,
I became a child---wide-eyed and chaste---full of innocence once more.

I sat upon the soft, green grass amidst the buzzing bees,
And watched them move from bloom to bloom while waving gently in the breeze.

Reflecting back, I picked a stem and began to dream and wonder,
Thoughts and memories flooded my mind which prompted me to ponder...

"Were the tales of the wish makers really true?"
So, I closed my eyes, made a wish, took a deep breath and blew.

I wished not one, nor two nor three, but upon my lips were many.
"Could there be magic in those Dandelions to change the world any?"

No longer would there be hatred, but love would take its place.
Gone would be despair and sadness; there'd be joy and smiles upon each face.

No loneliness could e'er be 'round, depression nor lack of self-worth,
No strife, despair or suffering would be found upon the Earth.

Darkness would turn to light,
Instead of blindness, there'd be sight.

The weak would become strong,
And right would replace all wrong.

My wishes---like feathers flying through the air, upon the wind, they scattered.
I'm not sure where they landed, but the thought was what really mattered.

If thoughts become reality, then wishes really can come true.
I'll hold that moment in my heart and wish all of this for you. 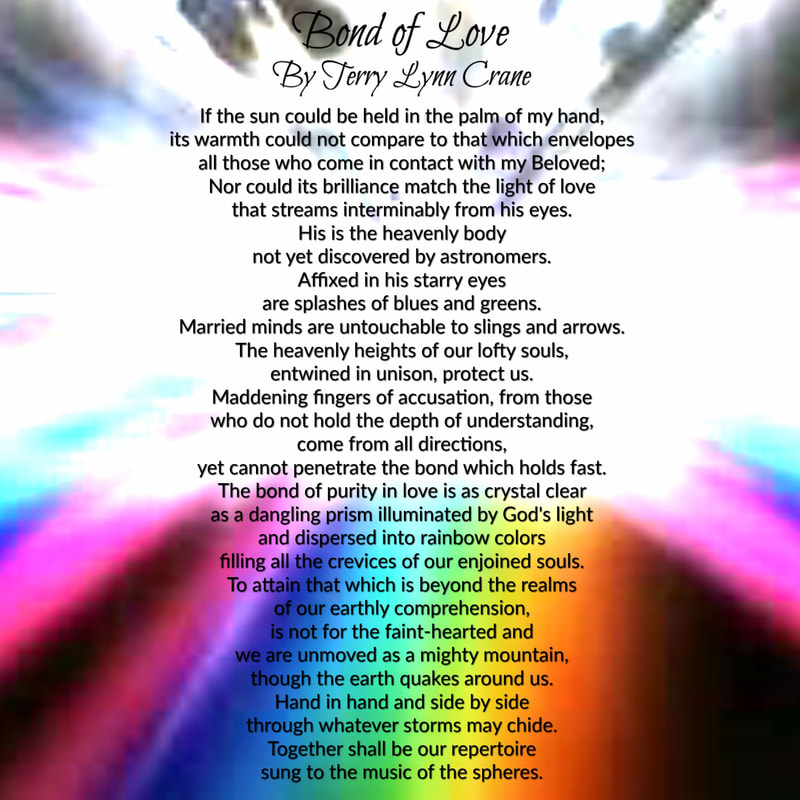 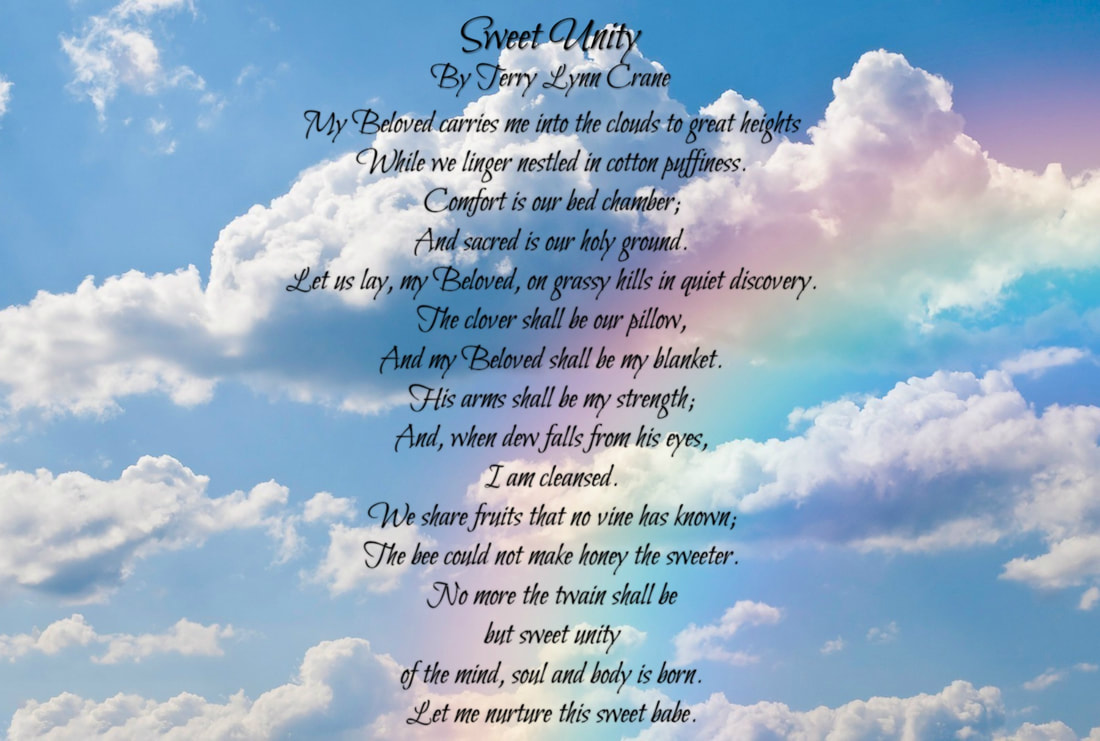 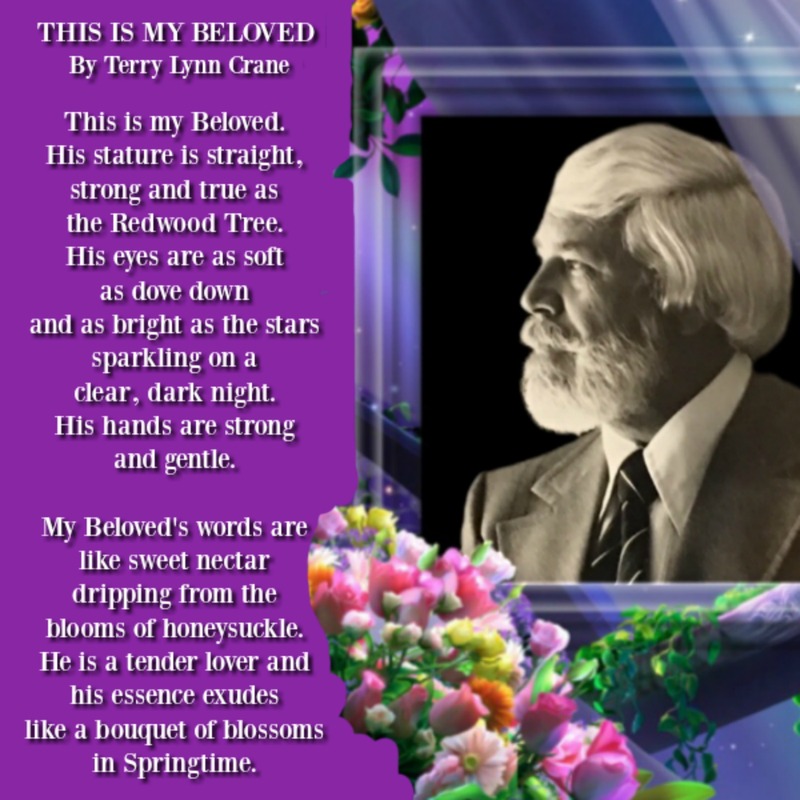 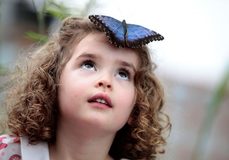 ​THE BUTTERFLY
By Terry Lynn Crane

I saw a little butterfly in my Grandma's garden.
I said, "Little butterfly, I humbly beg your pardon."
"Do you prefer your poppies orange or like your roses red?"
She flitted from flower to flower and then landed on my head.

From my upcoming book, BEDTIME RHYMES 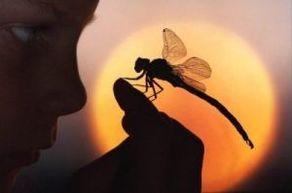 Sweet Sally sat beside a stream
Peering at her reflection.
A dragonfly landed on her hand,
And she felt a sweet connection.


A sound as lovely as a harp
Was the flutter of gossamer wings.
A touch so gentle upon her hand;
Then she heard the angels sing.

With a twinkle and a sparkle,
Sally heard a voice so sweet
The dragonfly said, "I'm your Grandmother,
I knew someday that we would meet."

"Always do your best, sweet Sally,
Be whate'er you want to be
Be kind to everyone you meet
And love others abundantly."
​
"I'm often watching o'er you---
Even though you do not see.
Remember when you see a dragonfly
You're really seeing me." 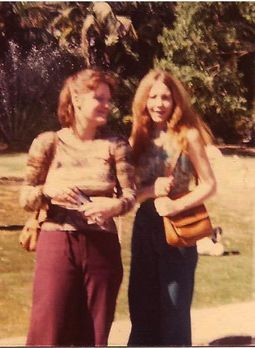 On lazy, Summer days, the sound of children's chatter would fill the air.
We were content to ride our sitck-horses...oh, we two were quite a pair...
With Kool-Ade-covered faces and a look that could start a trend.
How I miss those lazy, Summer days...
For it felt good to call you "friend."

Many adventures had we on Ramill in Tennessee;
And the evidence shown clear with a Band-Aid on each knee.
Sometimes we'd have our quarrels, but our pride would somehow mend.
Even through all the bruises, falls and scrapes,
It still felt good to call you "friend."

I can still hear "one potato, two potato, three potato, four,"
And frequent "tap, tap, taps" as you'd knock upon my door.
Yes, we survived cartwheel competitions and Pegasus rides upon the wind,
​Marble fights and spider frights...
Yes, it felt good to call you "friend."

Somehow we slipped almost overnight from little girls to adolescents,
From clover chains to growing pains while we strived to gain our independence.
I reflect on our pink face blushes over TV star crushes that we would marry in pretend.
We were heading to California or bust!
Oh, it felt good to call you "friend."

One day we got the news that you would have to move away.
There were so many mixed emotions, neither of us knew just what to say.
We vowed to keep our friendship through the letters we would send.
There were miles and miles between us,
But it still felt good to call you "friend."

Aristotle said, "A friend is one soul in two bodies" and I believe that this is true,
For half the person I am now would not have lived if it weren't for you.
And although miles may separate us, I know our friendship could never end,
'Cause I can still pick up the telephone...
Yes, it still feels good to call you, friend.