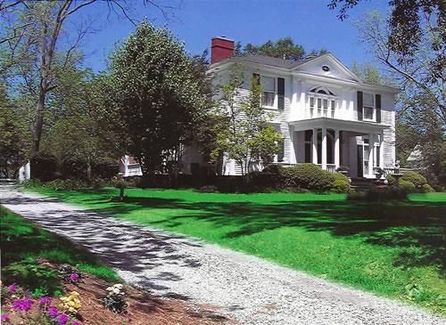 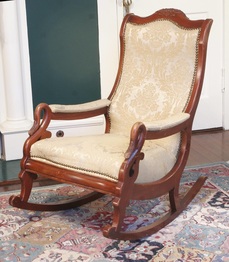 On February 14, 2000, my late husband, Fred, and I purchased an antebellum home, circa 1849, in Barnesville, Georgia which had served as a Confederate headquarters and hospital during The War Between The States. We refurbished the home and opened Tarleton Oaks, a Gone With The Wind-themed bed and breakfast. Each guest room was named after characters from the movie---Ashley's Chambers, Melanie's Suite, Scarlett's Suite and Rhett's Room.  Our Dining Room was known as the Tara Dining Room. Our slogan was "Tarleton Oaks---where southern hospitality is NOT gone with the wind."

The movers worked well into the wee hours of the morning moving us into the home. Our first indication that there may be some paranormal activity in there occurred that first evening. One of the movers, who had taken some household items into the garage, came running inside the house pale and shaking. He could barely speak and said, "I felt like something out there was staring at me."  He was so frightened that he had to be coaxed to stay and assemble our dining room table. Also, inside the house, a rocking chair rocked by itself for 15 minutes. 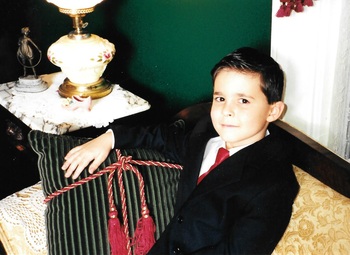 Our son, Tray, was 6 years old when we moved into Tarleton Oaks. The second night, Tray had the first ghost sighting. The next morning, he came running down the stairs screaming, "Mommy! Poppe! There was a man in my bedroom!" I said, "What?! What did he look like?" Tray replied, "He was tall with dark hair and he was wearing a grey suit." I asked, "What did he do?" Tray said, "He just stood in the doorway and looked at me." Fred and I looked at each other and wondered if there was really something to his story or if it was just a child's vivid imagination. About three months later, Fred, Tray and I were sitting in our Library at the house looking through a book we had just purchased earlier that day entitled "1400 DAYS OF THE CIVIL WAR. Tray sat between us on the leather sofa and was enjoying looking at the pictures. All of a sudden, Tray pointed at one photo of a Confederate soldier and exclaimed, "That's what the man was wearing!" I said, "What man?" He replied, "The man that was in my bedroom!" Of course, the soldier was wearing a grey Confederate uniform which Tray equated as a "suit". 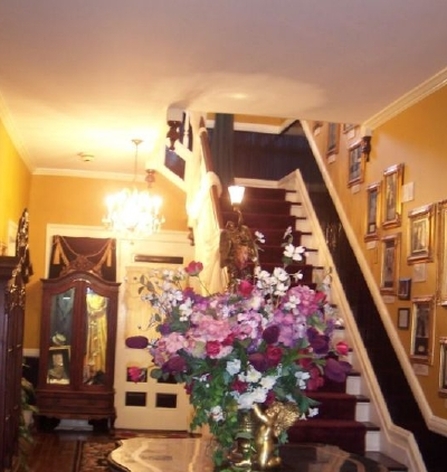 There was a winding staircase that had a strip of carpet  in the middle of the steps. I would vacuum the stairs every day. The next morning, there would be small hand prints on the stair carpet runner like a child was crawling up the stairs  on his/her hands and knees. 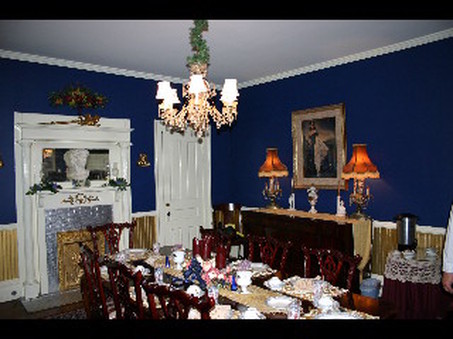 After our guests would leave in the mornings, Fred would occasionally change into a grey running suit to get comfortable and relax. One morning, while I was vacuuming the oriental rugs in the hallway, I saw something grey in my peripheral vision. I thought it was Fred looking for something in the Dining Room. So I walked into the Dining Room to see if Fred needed anything and, right before my eyes, was an apparition---a Confederate soldier---walking away from me toward the closet to the right of the fireplace.  He never turned around to look at me. He just continued toward the closet and then disappeared. Of course, I stood there, mouth gaping open, in total disbelief. We also found a secret passage in the floor of the dining room, which, at one time, had connected to a tunnel which connected with another house on Thomaston Street which was one street over. We surmised that it could have been part of the Underground Railroad.
Some guests would occasionally feel something sit on the beds in the guest rooms from time to time. From what we could surmise, the ghosts that occupied the house were some Confederate soldiers, an older woman in black, a young woman (who would hum) and three children (two boys and a girl) who occasionally played in the attic.

One day a man from Fox News, who had heard about our "haunted house", contacted us and asked if they could perform a paranormal investigation there with a group known as Historic Ghost Hunters. We agreed. They made several visits and conducted a very thorough investigation. EVP's and strange happenings were recorded. The finding was that Tarleton Oaks was cited as being one of the most haunted places in Georgia. To read about the investigations, click on the button below.
ghost investigation